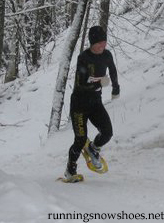 Just two weeks after capturing the Colorado State Championships, Sara Tarkington has been crowned the Champion of the Winter Teva Mountain Games Snowshoe 10k.  Tarkington’s competition was stiff as she was up against Lindsay Krause, Jeanne Cooper of Eagle, Colorado and reigning USA National Snowshoe Champion Brandy Erholtz.  Tarkington, Krause, and Cooper squared off just last weekend in the Beaver Creek Adventure Series with Krause claiming a 37 second victory over Tarkington and Tarkington finishing 26 seconds ahead of Cooper.  This weekend however, it was Tarkington who took the top spot on the podium.  She won the 10k race in 57:56.90, which was nearly two minutes ahead of runner up Cooper (59:42.70).  Erholtz, who is a 2 time US National Champion (2009 & 2011), finished in 3rd with a time of one hour flat.  Krause finished 4th overall in the women’s division with a 1:02:46. 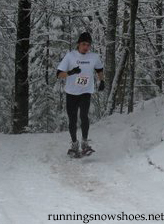 Josiah Middaugh was the winner on the men’s side with a time of 47:16.10.  Middaugh also won the Beaver Creek Race last weekend.  Scott Gall of Iowa finished 2nd overall in 47:39.00.  Finishing in 3rd was Travis Macy, who had a time of 47:44.10.  Jared Scott who won the Kahtoola Snow or No Snow Race in Flagstaff, AZ two weeks ago, finished in 4th with a time of 49:17.30.  Alex Nichols, who finished 2nd to Middaugh last weekend, crossed the line 5th today in 49:43.10.  Going into today’s race, Peter Maksimow was coming off of back to back bronze medal performances the last two weekends.  Maksimow finished 3rd at the Colorado State Championships two weeks ago and again finished 3rd last weekend at Beaver Creek.  Maksimow crossed the line 6th today in 53:52.10.

All Time Most Popular